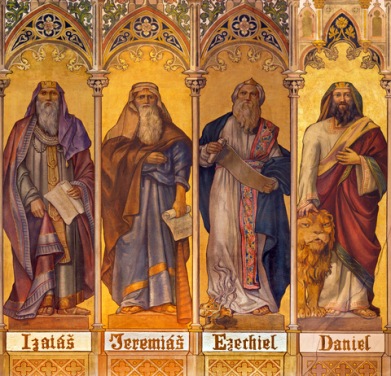 In my previous post I mentioned the possibility that someone in the Babylonian exile may have made a connection between their predicament and the attributes of God in Exodus 20:5; 34:7 and Deuteronomy 5:9 – especially the one that he “visits the iniquity of the parents upon the children and the children’s children, to the third and the fourth generation.” In this post I’d like to explore some evidence that the notion of transgenerational punishment was also discussed by other biblical writers at the time.

From our modern perspective it may seem unfair or unjust for one generation to suffer punishment for the sins of a previous generation. There is good evidence that some of the biblical writers had similar issues with the apparent injustice of transgenerational punishment. For example, both Ezekiel and Jeremiah refer to a proverb which said “the parents have eaten sour grapes and the childrens’ teeth are set on edge” (Ezekiel 18:2; Jeremiah 31:29). Both Ezekiel and Jeremiah are set in the time of the Babylonian siege of Jerusalem and the subsequent exile. The fact that they both discuss this proverb suggests  that it was probably an issue that was being discussed at the time, perhaps by the populace in general. Ezekiel argues against the idea that an individual or generation can be justly punished for the sins of another: “As I live, says the Lord GOD, this proverb shall no more be used by you in Israel … it is only the person who sins that shall die” (18:3-4). He emphasises that the people who went into exile were being punished for their own sins. Yet the problem remains that the book of Kings, and indeed Jeremiah, also claim that to a large extent the nation was being punished for the sins of Manasseh, four generations earlier. When Jeremiah refers to this proverb he makes the important distinction that “the days are surely coming” when “they shall no longer” say this proverb (31:27, 29). In other words, according to Ezekiel, the proverb remained true for his own time, but at some point in the future it will no longer be the case that one generation suffers for the sins of another. It seems that Ezekiel and Jeremiah had different ideas about the justice, or injustice, of transgenerational punishment, with Jeremiah being in agreement with the book of Kings (or, alternately, Kings being in agreement with Jeremiah) and Ezekiel (and Chronicles, which was written, or completed, after the return from exile [1]) taking a different position.

For some people the idea that one part of the Bible is in conflict with another presents a problem. Many readers of the Bible expect to see a consistent message which they understand to be a revelation of the divine purpose. This is really a theological issue and, in my view, is the result of approaching the Bible with a predetermined expectation that all parts of it will be in agreement with every other part. However, it seems to me that the Bible is better understood as an ongoing conversation. The writers come from different perspectives as they tackle complex issues and sometimes arrive at different conclusions. There is evidence of revision and editing as later writers or editors refined the texts to reflect new perspectives, perhaps in the light of new circumstances and experiences. Sometimes older writings were reinterpreted and applied in new ways to new situations. In this way, we can read the Bible as a dynamic collection of writings which preserves the development of ideas about issues such as divine justice.

Returning to the book of Kings, I can understand how those in exile who interpreted Exodus 20:5; 34:7 and Deuteronomy 5:9 to mean that their defeat during the reign of Jehoiachin was the consequence of sins committed four generations earlier, might revise and edit the record of the kings to reflect this new understanding. We don’t know whether these records existed solely in the form of the Annals of the Kings of Israel and Judah, or whether these Annals had already been used as sources for an early edition of the book of Kings. Either way, the book of Kings may have been written in the exile, or edited to include additional material which highlighted the sins of Manasseh in particular and of the kings in general. This would explain the repetitive use of the phrase “He did what was evil in the sight of the LORD, and followed the sins of Jeroboam son of Nebat, which he caused Israel to sin” which is used almost like a rubber stamp added to the end of each king’s reign. It also explains why this formulaic conclusion is often at odds with the positive material which preceded it.

Over time, this notion may have been debated and challenged, and by the time the book of Chronicles was written after the return from the exile it needed to be modified. This is reflected in the different emphasis of the Chronicler. Other exilic or post-exilic books appear to deal with the same concerns about divine justice. Although it is difficult to date biblical texts a good case can be made for also dating Job to the time of the exile or later. A major concern of Job is why good people suffer for no apparent reason and may have been prompted by a discussion about why innocent people in Israel and Judah went into captivity. Job certainly contains some of the language of exile. If Job was indeed responding to issues arising from the exile, it demonstrates how other biblical writers were also wrestling with the questions of  divine justice in the suffering of the covenant people. It also demonstrates how the Bible preserves more than one point of view in the conversation.

[1] Chronicles ends with the decree of the Persian king Cyrus allowing the captives to return to their homeland, which dates the book to that time or soon after (2 Chronicles 36:22-23).